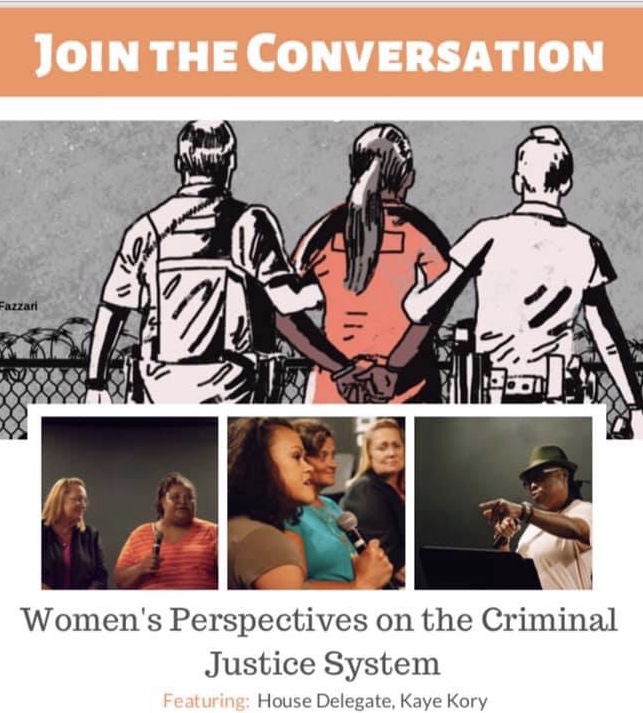 Over the last couple years, the Virginia Department of Corrections has made the news headlines, and not in a good way:

All these headlines have made many legislators, and activists too, give some serious thought to issues of criminal justice reform and prison reform. Delegate Kaye Kory (D-38), in particular, wanted to tackle the issue of access to feminine hygiene products for female inmates–which the inmates had to spend their limited funds to buy from the prison commissary. So she sponsored HB83 last year, which requires correctional facilities to provide such items without charge. The bill, surprisingly, passed the General Assembly unanimously. But in preparing to present this bill and subsequently in following up to verify that the facilities were actually implementing the policy, Delegate Kory visited a number of correctional facilities and met many female inmates.

She learned about an incredible nonprofit organization, Friends of Guest House, that helps women re-enter the community after incarceration. A couple weeks ago, they co-hosted a discussion on issues affecting women in the criminal justice system. They brought four formerly incarcerated women with them, to share their stories. I’d like to tell you a bit about them (my notes were a little messy, because I literally cried through almost the entire event):

Heidi was in a long-term abusive relationship with a man that beat her so regularly that she was in and out of the hospital constantly, with cuts, bruises, fractures, and broken bones. Each time she left with a prescription for painkillers. Like many victims of domestic abuse, she had lost or pushed away most of her close family and friends. So when she finally developed an addiction to those painkillers, she had no support network to turn to for help. Eventually, she was arrested on four charges of drug possession, and held on no bond. (Interestingly, she never actually possessed any drugs at the time of her arrest, just related paraphernalia–but after prosecutors told her they would hold her in custody while they waited for lab results on the paraphernalia, she agreed to a plea deal stipulating that they would find residue on the items.)

She described her detox this way: “You are stripped, and then left naked in an empty room, with no sheets on the bed (because you might use them to kill yourself), eating food with no utensils, for 7-10 days, and then at the end of those days, they determine if you’re ready to go into the general population.”

Because there are only a small number of female-only correctional facilities in Virginia, and as of June 2018, 6,700 women in jails and prisons, many women are incarcerated in formerly male-only facilities. To avoid the challenges of maintaining a co-ed facility, women in these prisons are often kept indoors in their cells throughout their incarceration. Heidi told us: “for 17 months, I didn’t see the sun. I worked from 11 pm to 6 am every day in the kitchen, for no pay, just for the reward of getting out of that box.”

Guest House helps women like Heidi who can’t go back to the home or community that led to their incarceration find a place where they can get a fresh start after their release. “The day I walked in, I was broken. I had no family, no friends, no toothbrush. They took me in and treated me kindly and unconditionally without judgement.”

The second woman, Cindy, had struggled for several years with painful dental problems; while she was waiting to be able to have major surgery to extract several teeth, she was given a prescription to percocet. She soon found herself addicted, and when the doctors finally cracked down on her prescriptions, she switched to heroine. At one point, she was in jail and pregnant–she had to give birth to her baby with one leg shackled to the delivery table. Later, during her post-partum period, she was kept sedated with psychiatric drugs day and night.

The third woman was Helenia. She grew up in the “projects” in Alexandria. Growing up, her mother ran a liquor house, driving to DC to buy alcohol which she then sold out of her house illegally. Helenia worked for her mom from a very young age. She said she has a 40 year history of experience with substance abuse. During her third time in prison, she received a scholarship that helped her commit to staying clean, and to set some goals for her life.

She’s quite a character, and her humor takes the hard edge off listening to her describe the challenges of life after incarceration. Helenia spent 18 months at Guest House after release from prison. She said you can meet all sorts of people there–lawyers, realtors, people running for office, even Delegates. “My whole Rolodex has changed!” When she started attending Howard University with the help of a scholarship she received, Guest House helped her with books and transportation to make sure she could succeed. But even as a student, when she applied for a job cleaning rooms on campus, she was told “due to your felony conviction, at this time you are not qualified for a job.”  She left Howard for another college, and is close to completing a degree in social work and is hoping to start her own nonprofit agency helping women leaving prison to get vocational training.

The fourth woman arrived late to the event, because she was coming from her job as a professional chef. She’s made quite a success out of herself since being released. She went straight from prison into Guest House, and from there was able to get culinary training from the DC Central Kitchen, and now is working at the Old Ebbitt Grill. She said that she’s been able to get her record expunged in Maryland, but that it is much harder in Virginia–you can’t even apply until after probation is over. (A woman in the audience spoke up as well, mentioning that she was on probation following a DUI conviction five years earlier, and that she’d kept out of trouble ever since, had been steadily employed, and had been offered a dream job in North Carolina, which she couldn’t accept because probation prohibits her from moving.)

As I said, I cried through much of this event. It was both heartbreaking to hear the stories about the horrors of life in prison–and how easily these women’s lives went off track, often pushed by forces beyond their control; and also heartwarming to hear what incredible support and assistance and love they were able to receive from Guest House. But here’s the thing: Guest House’s residential program can only accommodate 26 women. That’s a tiny fraction of the number of women who need a place like this. The criminal justice system would be far more effective and create much safer communities if we put more effort and money behind making the entire system more rehabilitative, and focused more on re-entry and setting people up to succeed following incarceration.